"we'll give you curry and frye for iverson... " 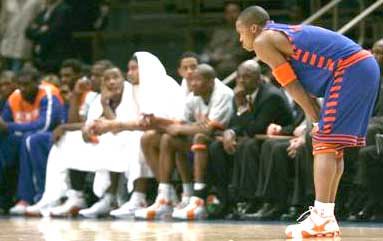 so francis made is knick debut last night. zzzzzz... talk about redundant! francis logged 33 minutes. shot 6-12 with 4 dimes and 5 rebs. the last 3 was made when dudes were walking off the court, so let's say his line was really 13/4/5. true it's his first game, but the minute you put on the knicks jersey you lose a step, age 5 years, and get richer. crawford played 13 minutes and went 0-3. nate was a DNP. this is bullshit.

the knicks getting francis for a contract isn't as harsh as those scenarios, but the redundancy is is so obvious! crawford gets 13 mintues!? uhh... isn't crawford making tons of money too? and aren't his stats per minute comparable to francis'? and nate's a folk hero in the making! dolon! want fans in the seats? how bout putting the reigning slam dunk champ on the floor! douche!

we'll see what happens when the season's over but i mean, this team looks listless. no life. we need our rooks on the court, not disgruntled guards who pine for ex-teammates and refuse to re-enter games. i'm pissed. 15 wins 39 losses, people.
Posted by earl boykins at 2:26 PM