B is for brendan! A is for awesome! 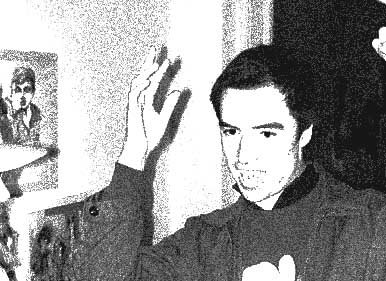 so brendan played last night at cakeshop with first nation. now, i have a giant soft spot for BARR starting from the dogg and pony days. i'd watch brendan get booed onstage and confront people and it was rad. i can't say his jams are for everyone, but to me it's super inspiring. sure it's idyllic and weird sounding, but i love it cause it's idyllic and weird sounding! it just makes me pumped when he talks about 'community' and 'squadrons' what can i say. he's not the only one living in the 90's! i just have a lot of respect for everything he's done and is doing. i'm a fan!

"what you wanna make? think about it! make it now!"
"give the magazine out for free! make it with me!"
"you had a plan for your band and you didn't tell your band now you're out of the band"
"A is for always"

go see BARR and first nation on tour with animal collective. it'll be a weird, rad show!
Posted by earl boykins at 1:08 PM