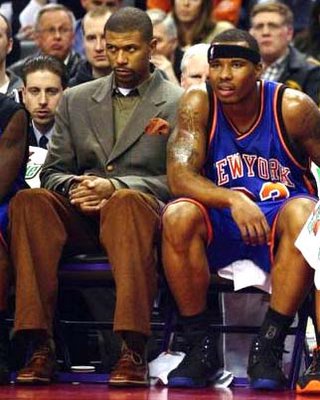 so the knicks fell short to the rockets today, but not by much. and jalen looked good! making the pass that leads to the assist! spreading the court, chipping players on their way to alley-oops, etc. basketball IQ! who knew? i don't think this was a wise trade, but it could have some short-term entertainment value. it seemed jalen mellowed out the team and dudes were playing in rhythm and knocking down jumpers. everyone but jerome james. wtf this guy looks lost! and out of shape!

enough abut the pick we got with rose, it'll be a 20th pick. i bet isiah ships jalen out before next season anyway. david lee rides the pine again! that's fine but don't name him the starter again next week just so you can bench him again later on. douche!
Posted by earl boykins at 12:36 PM