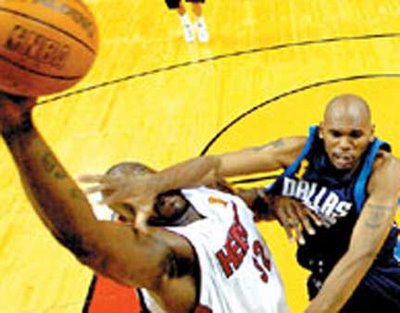 stu really blew it on this one! maybe it was an executive call from stern. makes you wonder if the league is really pulling for the heat, which makes a ton of sense when you think how much they want to market the shit out of wade. i just don't know how the league office can look at the foul, over and over, knowing it was already called a flagrant, and suspend stack.

even without stack i think the mavs can still beat the heat, but marquis has to show up like he did at the end of last year. remember that? he was supposed to be josh howard pt deux. it's gonna be a sick game!
Posted by earl boykins at 2:42 PM

oh boo fucking hoo. I suppose Dirk shooting 35% is part of the executive conspiracy too. Not surprising to see Mark Cuban's boys cry all the way home. Avery Johnson bitching at the refs because his players are too stupid not to call a timeout during a free throw. Whiny bitches. Haven't liked the Mavs since Tarpley was smoking crack.

Face it, Dwyayne Wade is the only superstar in this series.

since when is shaq not a superstar?