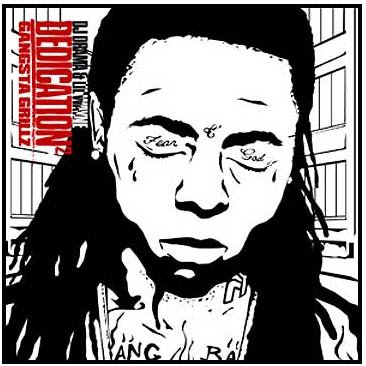 1st line: 'The cover of Dedication 2 shows Lil Wayne, eyes closed, the words “Fear God” inked on his lids.
last line: 'What remains to be seen is whether he can convince the rest of us.'

and goes on to give the record an 8.1. i give the record a 7.5. i give the review a 7.0. i agree wayne is probably one of the greatest active right now, but this tape is just good. i think wayne just to prolific. he waters himself down.... if dedication 1 was the standard, this one is a little sub-par. still great, but wayne set the bar high. at least macia gave drama credit, who's kind of crazy these days. everything he touches is amazing, except for that pharrel tape, which is giant stinky turd. macia does say [about drama] that 'he’s killing the mixtape game right now'. slang like that on pitchfork makes me cringe. i don't know why. just on pitchfork...

but dedication 2 being 'the year's most vital mixtape'? hm, i'd take the w carter collection over this [was that this year?]. the yo gotti gangster grillz for sure. what am i forgetting? any of the southern smokes? the pimp C one? still waiting for that fucking juelz/wayne tape! that's gonna be funny as hell! the jokes!
Posted by earl boykins at 1:38 PM