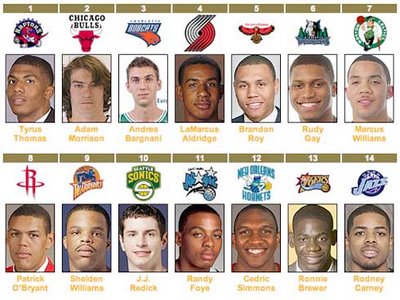 look at this espn consensus mock draft. if there was any year that the knicks would forfeit their #2 pick it would be this one. i mean, morrison looks like a 14/7 guy maybe. tyrus thomas disappeared at times. man, talk about the misuse of the concept of 'upside'. todd day anyone? bargnani is an interesting pick, and i year the raps might go for him [with their new euro asstant GM]. rudy gay looked fine. marcus williams might be chris child pt deux. JJ will be fine, or maybe he'll be a kapono/casey jacobsen clone. i know i know. stop comparing him to other prolific, white, ncaa bombers. but redick is a, well, prolific, white, ncaa bomber! obviously no stunners in this year's draft.

but there will be a gfew all-stars in this bunch. there always is. a marion, amare, or wade. fuck all this talk that riley knew what he had in wade. no one knew! sure he had a nice run at marquette but to predict this? its 25% scouting and 75% luck. hopefully the knicks will trade up and do something interesting. isiah has a boner for the draft. he'll try something.
Posted by earl boykins at 1:12 PM