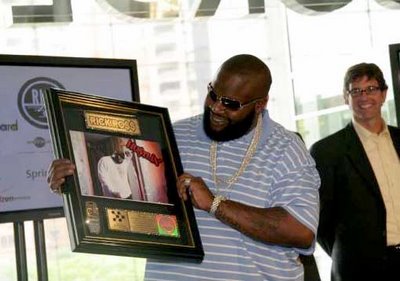 my last one. hopefully. last night he played the fader jam sesh and surprizingly showed up in the middle of the heat game! wtf! anyway it was a train wreck to start it off. obviously everyone was waiting for one song. i wonder which song that was? and he played it. three times! you know it's coming, you know what it's gonna be like, and it was still amazing! like watching classic games on espn. i know larry's gonna hit that 4 pt play, but even though i've seen it a million times, i still get choked up and jump around. yes. the jam was epic. totally worth it.

so three days after i declared rick ross the jammer of the summer, i kinda proclaim him as over. i dunno. hopefully not, but if you can't get a roomfull of drunk girls, in the summer, on a boat psyched on more than just one song that's a sign.

also, jay-z was there! he did his own verse from the remix! then he stole my portable tv and disappeared in a cloud of smoke yelling 'n-e-t-s! nets! nets! nets!'
Posted by earl boykins at 12:31 PM