at least don chaney's not the coach 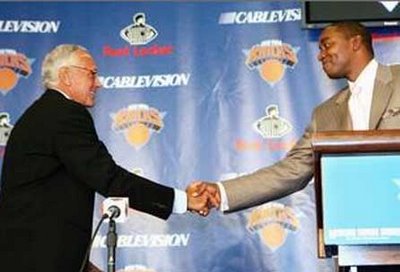 so the other foot dropped. great. what a waste of a season. larry, i still believe, thought he was doing the right thing in the long term. i think he was trying to teach these guys a lesson about teamwork and defense. and it didn't work. right away. and larry has nothing else to blame but his stubborness. if marbury wants to shoot more and we're losing? let him shoot more! if you call matt barnes your starter, stick with him for more than a week! anyway this is like beating a dead horse. i hear rumors that MJ wants larry in charlotte. good luck over there!

now zeke is the coach. ok bring it on isiah. these are your players... all-stars, young hotshots and veterans. i expect nothing less than a .500 season. i really do. make a trade or two, and get us within sniffing distance of the 8th seed. that's all we ask for. not a conference finals series, just progress. do it.
Posted by earl boykins at 1:26 PM

Yes, pal, this is a serious sport. For a serious sport, you need a coach. In any business, if you want to be the best, you need a coach. Even for writing a Linkedin resume coach is needed. It is good that there are high-quality tips and sites like this one https://linkedinprofilewritingservice.com/blog/linkedin-resume-tips/ that can partially replace the coach. I always use them.