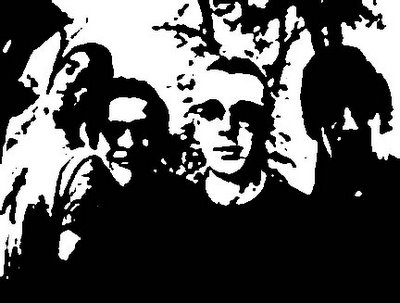 ken gave me a heads up a couple of weeks ago but it's offically blown up now: don cab has signed to relapse! i say good for them but i dunno why damon kept the name. i mean, he could've changed it and still played old jams. the way this band broke up/re-formed is lame. dino jr but kinda worse.

still, it makes me pine for the 90's. i used to do a zine and i had an issue that was a 100% fan-out on don cab, rodan, and slint. just me talking about them and all their albums. i used this picture as the opener. and it looked like this cause i zeroxed it 40 times over and it lost all its grey-tone. later on i got to interview jason noble and that was rad. he told me rodan would be around for years experimenting with shit and then they broke up a few months later. he told me this at the don cab farewell show at maxwell's!

so i'm getting all emo cause i left home for the first time 94, to take art classes in pittsburgh. i was super young. long hair. braces. at the time the scene there was great. don cab, karl hendricks trio, hurl and some other bands. the grifters came through that summer. codeine too! that's where i met john engle and doug scharin for the first time. it was a rad summer for sure. and somehow seeing this picture now makes me psyched and really bummed. an obvious response but still.
Posted by earl boykins at 12:13 PM

isn't it still the nineties, hurl?

hurl was good. slow, intrusmental jams with emo songs mixed in. they put out records on desoto and my pal god. i think i saw a hurl/a minor forest show once but i could be making that up...

in keeping with the subject...

you can thank me by letting me know if you ever stumble upon any of the simple machines "working holiday" split 7"s from 93...thanks yo@!

haha thanks dude! it's funny how in 1995 i would've paid $40 bucks for this! i'm no ebay master but i'm gonna try to score this off the seller.

i think i have all the working holidays split 7"s. which one are you looking for i can check if i have doubles. if i can find all my singles that is...

im still hunting MOST of them. i have april, november, and july so far. i dont even know why i "have to have them," i just do ya know?

i was saying "hurl? good? you crazy"

why bother dissing hurl? didn't you like gvsb for a second too? sure, hurl are not the greatest band ever, but haven't i heard you say 'magic numbers are AWESOME!'? faced!

imperial... just get the x2 CD. it's got a live version of 'darjeeling' on it. i see it randomly in used bins these days. maybe amazon has it used?