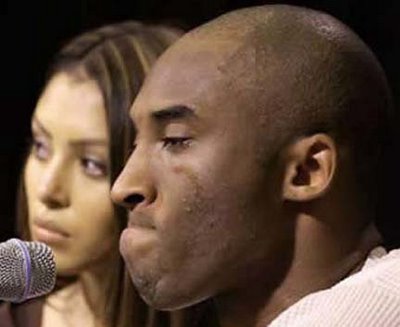 some interesting facts about kobe bryant this season. thanks to spence, team Aí Dios Mios, and the interweb for these dubious nuggets.

1. sunday kobe made 28 field goals. odom lead the team with only 7 assists

2. shawn marion has more double-doubles this season (31) than the entire Lakers team (26)

3. Sunday, the day Kobe Bryant scored 81 points, was the 666th regular season game of his career.

ok 81 is impressive ,and his team needed it. but they were playing the raps. if they were playing a winning team with a real coach i bet you the lakers would've lost. what defensive scheme was mitchell playing? aaanyway that team sucks and that coach is an assistant at best.

but 81. and a good shooting night. congrats. kobe is a ball hog. we all knew this. i wonder what other players could go off for 81 if they took as many shots? a.i.? ray ray? t-mac? lebron? it's all possible. no one's denying that kobe is a 'closer'. dude shoots daggers in the 4th and is one of the best players ever. no one's denying he's a filthy douchebag either. except if you're jack nicholson. oh yeah, he's a yankees fan too.

i'm not hating kobe cause he's good. he's a great player! i'm hating him cause he's an accused rapist, got his teammate [the most dominant player in the league] kicked off the team, does commercials where he's speaking italian in euro gardens, can't laugh at himself, doesn't stand up for his teammates, and just plain sucks at being a person.
Posted by earl boykins at 12:41 PM

kobe is just the worst. I can't even describe my contempt for that dude. i think he has 2 assists and 3 boards in that 81 point game.