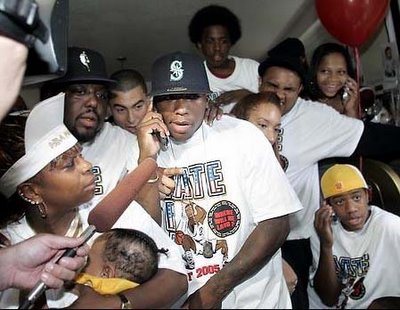 it sucks that the only thing knicks fans have to look forward to is giving up our top 5 pick to the bulls and seeing nate rob in the dunk competition! one of those sucks and the other is AWESOME! josh smith will be tough but i think n rob will come through with some spud webb shit. it's hard to tell though. the dunks have been lame ever-since-vince but nate's got the weird freakshow vertical. f the rumors that the team hates nate. they love him! i watch these games!

so the knicks got blown out by the hawks last night awesome. i don't know why larry isn't playing his rooks, cause playing veterans ain't gonna get this team anywhere. we're not going to the playoffs so we might as well check out what the 3 dudes can do. i'm tired of getting pissed at larry. it's just so obvious. now i'm all pissed at isiah! we'd have been better with KT and tim thomas over Q and curry. fuck the 'younger and athletic' bullshit he's always repeating. tell larry to actually play these 'younger' and more 'athletic' players! show us the progress booo!

it's weird how bad isiah is at trading while being really good at drafting...

i'm even cool with the curry trade - there supposedly isn't much in this year's draft, so curry + davis for thomas and harrington is aok with me. you get a starting center for basically nothing.

nazr mohammed for malik rose. WHAA? in what universe is this not a ridiculously bad trade. why did this trade happen?! i guess they did it for the draft picks? i guess? but then rose's contract is a total burden and you have to sign jerome james as a backup center, doubly screwing everything up.

moochie norris and vin baker for mo taylor. ok, props to isiah for this one.

so, on the whole... he makes good moves and then completely fucks himself. if the stakes are low (like drafting or picking up unwanted players like marbury, taylor and curry), he does GREAT. but in actual, balanced, tough negotiating, he does terribly.

ah well. i had high hopes.