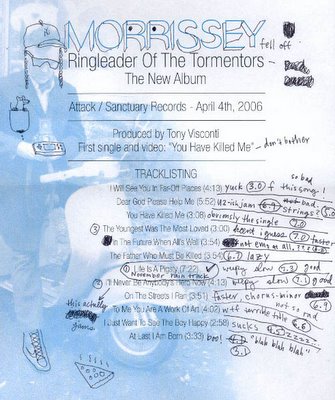 i was so ready not to hate. i was super pumped will hooked it up and got me into the thing. i was all happy and riding my bike there thinking 'there's no way this will be worse than maladjusted or you are the quarry' sure i expect some duds but i also expect some jams right? zero! i walked in during the middle of the record, which was actually the best part of it. the single sucks kinda. there are some laughable lyrics too. not in the usual laughable way, i mean bad laughable.

the deal is now he's psyched and not emo at all. he want to live forever now and eat grapes in rome. i shit you not. in the release he's all, 'i don't give a shit about endearing myself to the public.' obviously not!

not to say i won't listen to this album when it comes out. i've changed my mind before. but if i got all pitchfork-wise i'd give it a 6.2?

there was a break when the recorded ended and the dude went to que it up again, and i go 'fuckit just put on vauxhall and we'll all be happier!' then i realized i was the only one in the room.
Posted by earl boykins at 2:29 PM