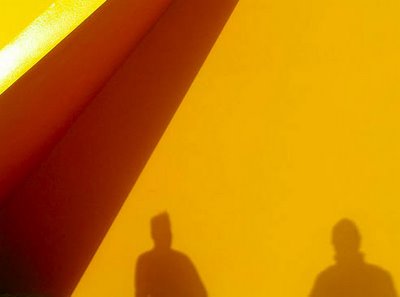 it's hard to pound 50 beers before dinner and be reasonably coherant. yesterday there was 2 epic sheshes for 2 very epic dudes. first hi-five to tony and his bananas year. really tony it's all downhill from here. how can it not be? it's one of those 'if you happen to brush up against him play lotto. 9/10 times you'll win' and second it was brian's birthday where i swear i tried to tackle him 15 times. too bad he's 9 ft tall. who would win in a fight will or brian? good luck tony! happy birthday brian!

oh i just remembered that i grabbed a piece of chicken from manute's chopsticks with my hands. i am the best!

do you like this emo picture? it's a google inspired homage to this band called belle and sebastian? i hear they're pretty good... anyway they are shredding the nokia theater for 2 nights and will definitely not be there singing along to 'i'm a cuckoo' and i have never danced to arab strap in my life. i wonder if they'll play 'we rule the school' only one way to find out eh?

now that i'm thinking about it, could i have been wrong about the new moz? no! the trouble with listening parties is that you can't really get into the album so i'm not 100% sure. just 95% i wasn't really surprised pat loved it, but really it's not that good. and that's not a dis to morrissey at all. c'mon he's in his 'patrick ewing- seattle supersonic' era of his musical career!
Posted by earl boykins at 2:23 PM