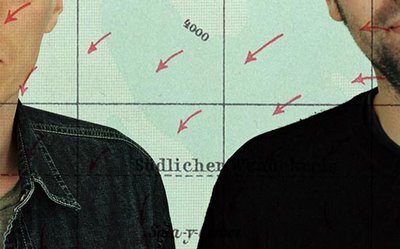 here's a list of jams i've been jamming this week

duo505- better than their solo stuff. kinda epic. old though. where did all the rad gameboy music go? i was super into that stuff! maybe i just go back to some e*vax or lullotone too.

title stay in harlem- or as kelly says it, 'tidal!'. the best $4 i ever spent. the comedy! the gunshot samples! cooked crack 1-3 too!

clap your hands- yup i like it. fuck you jason there are some jams on this record. 6-7 jams!

pelican- 'red ran amber' is sick. totally sick! i listened to that 4 times in a row on a vietnamese veggie-chicken slamwich mission!

explosions 'the rescue'- this band just rules. i like the sketchiness of this EP what with the pianos and bells. don't pay more than $40 bucks for this on ebay though. but for $39 it's worth it.

meta-matics- we heard it at the vish [weirdly] and i went back to listen the record. fucking awesome. good move by troubleman re-issuing it cause no one would've heard it otherwise. one of my favorite shows ever was the meta-matics and the makup at the cooler in 94 or something. chuck bettis killed it! i have a whole roll of film of him spazzing the fuck out. i bet josh has the same roll but a different angle. all-scars and his solo stuff is good too but nothing comes close to that record. and that black gemini make-up split is one of the best 7" of all time. right there with the cupid car club and room no.9, kentucky [before the CD] singles. blue is beautiful! we should be holding hands!

ok i secretly just wanted to fan-out on the meta-matics.
Posted by earl boykins at 3:08 PM