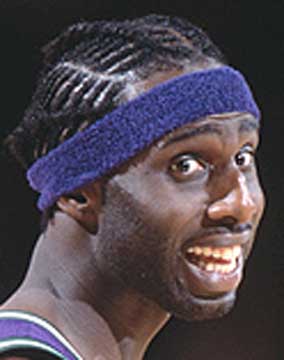 "I've never been in a situation I didn't know in my heart we were going to get better," Larry Brown said after Monday's perfunctory pummeling in San Antonio. "And I'm not giving up here. But it's embarrassing. Every game, to go out like this, and I don't see one change in terms of the effort and enthusiasm or the unselfishness."

And then, the gut shot: "This group," Brown said, "maybe we don't think about the same things I do."

on a day when tim thomas decides to sign with the suns, and a chance at a ring. sure we all poke fun at TT's 'fugazi' k-mart allegations, but when was the last time a knick cared that the team was losing? hmm... larry johnson? latrell? i know! tim thomas!

remember when a player got hot against the knicks? anthony mason would knock him down and get thrown out. spre would get up in his face. LJ would box him out to the halfcourt line. tim thmoas would... make fun of him after the game! but still, there was a sense of pride. you think francis doesn't know he's a pawn? like rasheed's one game with the hawks or piazza's one week with the fish.

now that we're talking about francis, i think it's almost time to start thinking of him as a declining player. an isiah rider. a laettner. sure they all had their moments, but they're not once what they used to be. and it happened quick. not from injury, but in their minds. maybe next year isiah will ship him off to memphis or minnesota and he'll thrive again, but hello nick van exel career for the 'franchise'. am i jumping the gun a little? have you seen this guy play this season?
Posted by earl boykins at 1:09 PM

i wouldn't say lee, frye, or nate are on the decline. but who knows... they may have peaked what with the luck of the blue and orange...