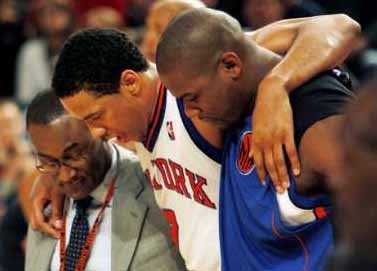 i'm officially hating on this guy. the season's been over for months and he STILL wouldn't play the rooks. this from the same guy who sat melo and lebron during the olympics cause they didn't 'play right'. douchebag maybe you're not coaching right! how the fuck did you lose with THAT team? no one talks about larry's bullshit rotation that summer. sure he won a championship with the pistons. that team was/is SICK. he did a fine job there. ok. kudos.

but how can you not see what's happening with the knicks? that's like if your car broke down, and everyday you take it out again and it dies on the street. 'oh well, maybe tomorrow it'll get me to work'. and you have a fine, working car parked right next to it in your garage.

so frye is out for the season. on the first game larry decides to play him and he leaves with 19/9 and 4 blocks. why. hasn't. this. guy. been. playing. i'm pissed. malik rose does not give us a better chance of winning. larry's biting his nose to spite his face. dude has way too much pride. fucking get nate rob in there! we know what everyone else can do. he needs the clock. get david lee in there! let him learn something! then trade him whatever. that's what the knicks do, but can we at least see if this guy can play?

fuckit larry just resign. it's been real.
Posted by earl boykins at 1:42 PM