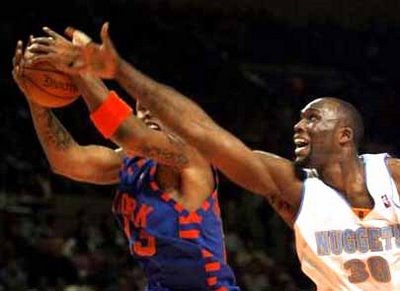 i'm really over this brown/marbury drama. it's tired. ok so marbury wants to be starbury again. fine. gimme that 18/9. what he's benched now? great. it's embarrassing. larry should just opt out of his contract cause it doesn't seem like he's having any fun...

so the news is that isiah will try to move a guard for a PF. wasn't there a PF available this season who's averaging 10 rebounds? right! reggie evans! i would trade francis in a second for evans now. i have no jokes. i'm just so bored of this shit!

i'm pulling for the "mcguardy-less" rockets. and i wouldn't mind seeing memphis do something. indiana too. fuck the knicks. listen to hold steady.

"she said it's good to see you're back in a bar band baby. i said it's great to see you still in the bars!"
Posted by earl boykins at 12:41 PM

It would be great if you just PENIS