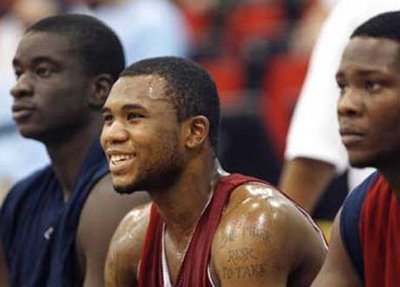 it's the chatter of the beginning of the nba season! this time of year is sick... the MLB playoffs, football, and the motherfucking NBA! and dajuan wagner got signed! who else is pulling for this guy? i hope he gets a starting spot on golden state, especially if the warriors trade dunleavy and pietrus [who will never be any better than he is now. fuck 'upside']. dammit where's the NY drama? they're gonna release mo taylor? fine! larry brown is suing dolan? good! bring the season on! those $15 shoes will fuck marbury's feet up and it'll be the 'franchise' and nate show!
Posted by earl boykins at 12:16 PM