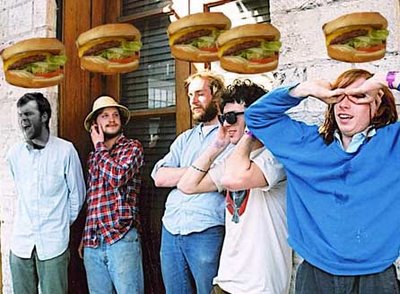 dr dog report from LA! they played the troubadour with elvis perkins and cold war kids. elvis was much better than he was at the pool... he played his songs with a little less 'drum circle' and 'carney' vibes and that mean his rad songs sounded rad. he did 'ash wednesday', 'without love' and 'while you were sleeping'. not mad!

the dog? what can i say? should i just start the fanclub now? what a great band! the sound was iffy at first but after 2 songs the band had it figured out, and it blew by in a flash! toby was 'in the zone' and they looked like they were having fun. 'alaska' shredded, 'wake up' too. 'ain't it strange' was a bit slow, but it's a treat to see that song live.

cold war kids we didn't bother sticking around for after jason claimed them as 'a band he'd like to punch'.

it was a rad trip. i'm jetlagged. sunburnt. full of too much food. happy birthday KTAX! i call next year! same place! same band! same crew!
Posted by earl boykins at 10:30 AM