it was raining cats and dogs 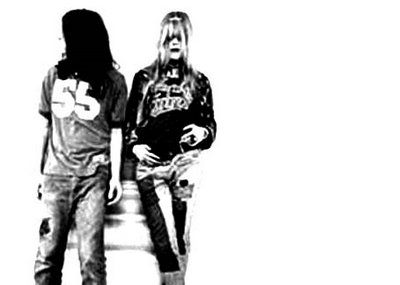 wa waaa... but it was! and also neil haggerty played the merc last night.

but first white magic opened up. some 'un-named' bro claimed they were 'dull' and 'boring' and i thought to myself, 'is kelly right?'. no! they were great! this time it was a full band with doug, the guy from soldiers of fortune on bass, and the dirty three drummer [!]. it was really good. i'll always be a fan of the billotte sisters, and even though i want to keep saying the mira borrows too much from her sister, i think i'm wrong. the madge has their own thing going on. great stuff. of course they played one of doug's songs and the spell was immediately broken, but it's hard to keep up with all the spookiness...

then haggerty and the howling hex... 30 minutes late. a devoted tamborine player who was standing in front of sheet music[!], poetry interludes, and a sexophone. or in this case, a hexophone! wacka wacka. and the were... FUCKING GREAT! i'm serious! it was a killer jam session! the songs were long, weird, and intense. dude can SHRED. i mean, it sounded weird but his fingers were doing the nuno bettencourt thing. they were all covered in jazz sweat and no smiling at all. i was jamming so hard to the jam vibes! oh yeah. the tamorine guy had a tribal tattoo as well.

i had to post a pic of the trux instead of the hex because they are so damn cool looking..
Posted by earl boykins at 11:23 AM