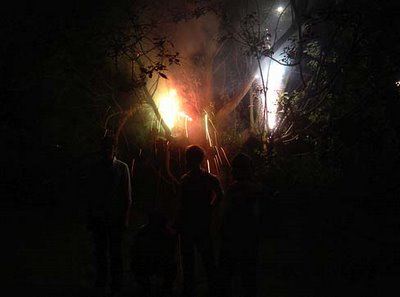 "yellow house". now how are you going to avoid talking about the animal collective biting? they're in close proximity of eachother, the both have animal references in their names [in not just the word, 'animal'], and they sound very very similar. yeah, the griz are probably huge fans [do they deny it] of AC, but who isn't?

the new one tries harder to find its own voice, but it's still dave portner stylings everywhere. and it's not all that bad- there are moments of radness, but i just can't shake the comparison. at their best GB sound like a sloppy, big, jam band. at their worst the sound like a lot of other songs you've heard before. a nice revord cover, well produced songs. good, well produced songs!

but it's still totally biting, dudes!
Posted by earl boykins at 2:07 PM

both are quite their own thing, IMO
but who am I
just another blogger

'feels' had tons of structure... actually, there's little to no improvisation on AC collective songs...

3 songs on this GB record sound a lot like 'banshee beat' to me. who's yelping?