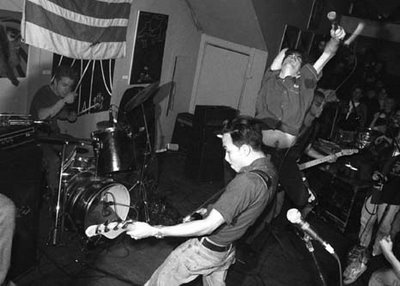 first line: “Believe me, it was a lot cooler in the 80’s.”
last line: "For now this little pink pseudo-leftist book is about as mushy as he’s going to get."

"What, exactly, was cooler in the 1980’s? Big Black concerts? (Certainly; the live album “Pigpile” offers proof.) Music? The world?"
TRUE
"Dischord has a legacy, and a reputation, to match Touch and Go’s."
TRUE
"It’s easy to sneer at nostalgia, but what’s the alternative?"
TRUE
"The language sounds a lot like Mr. Albini’s surprisingly fulsome tribute to Touch and Go; neither of them can pretend he doesn’t miss the good old days."
YEA I GUESS
"For now this little pink pseudo-leftist book is about as mushy as he’s going to get."
I DON'T KNOW JUST WAIT

sanneh's just touching base here. i wish he would've gone further into svenonius bullshit writing, which i always saw as a backhanded attempt at saying, 'you guys aren't as smart as you think you are'. but toosh, mr svenonius, we went to college too. i dunno maybe i'm projecting. it's also hard to get mad at the singer for one of the best fucking bands ever. look at this photo!

ok so those youtube big black clips are fire! damn big black still sounds just as good as they did back in the day! i kinda wish i went now...

the youtube clips get a pitchspork douche meter of 7.5. sanneh's piece isn't as funny as his last few but the subject matter isn't as funny. and he couldn't really go off because, really, who cares about big black and ian svenonius pocket-readers? thusly the review gets a 7.1. hey man even jose canseco didn't hit .500...

the other night, i listened to "passing complexion" from "atomizer" on repeat for at least an hour.