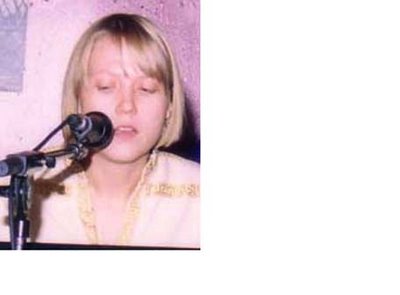 white magic at cakeshop. mira and doug played an acoustic set for a receptive 20 people on saturday. it was sloppy, poorly executed, casual, great music. great! sure mira's voice stylings are patterned after her sister's in slant 6 and quixotic, but they still sound fresh and inetersting. a really great sound. tonight her vocals did everything to overshadow doug's 'village idiot' routine.

he's charming and really funny, but performatively, it dubious. 'you only laugh at me because i have a british accent'. no, we chuckle because you forget which instrument to play during songs and spill the same cup of beer over and over. not mad at all, but it overshadows the songs too easily... songs that are solid, but too fragile to mess around with. that said, a casual set by a solid NY band. psyched for the EP and full-length! they'll be awesome!
Posted by earl boykins at 8:41 PM