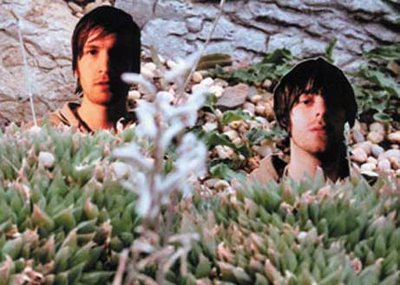 this band was my shit in the summer of 2004. or was it 2003? i was kind of an e*vax fiend and when ratatat came out with their dualing guitars and lava lamp projections i freaked out. their first album came out on XL and i think i played it 1500 times that summer. sure, the band has inherent flaws... hipster billyburgh status, kitsch guitar situations, no vocals, etc. but it's catchy, and it cuts really deep what with my 8-bit nintendo upbringing [what happened to that 8-bit music scene? anyone?].

so since then i've kind of burnt myself out on their sound. i just forgot about it with the rest of my audio dregs records. and now the new ratatat is out, with weird song titles... and the song they leaked ['wildcat'] is laughably bad hipster stuff, but all in all? it's so good still! maybe a little less macho that the first [and that awful rap CD]. this one has the kid icarus vibes still pretty heavily on it, and it kinda makes me nostalgic/weepy. i know they go for camp, but to me it's kinda beautiful. so i can't go out and objectively say this is a good record. it may be. and it may be terrible. but subjectively? YES! there's finally new evan mast material! evan! the new e*vax now please. PLEASE!
Posted by earl boykins at 1:37 PM