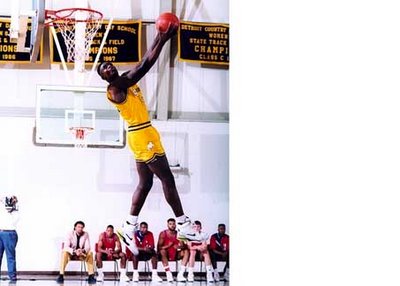 so the bergen record reports today that king is offering cwebb to the knicks! this makes so much sense. a crazy player in the twilight of his career with a ginormous contract. they're saying Q, and mo taylor for cwebb. fine. malik rose and jerome james? whatever.

you can see the trainwreck from a mile away. this was years in the making, when spre was running around telling the post that 'a certain friend of his wants to come to NY and play with him'. logic says to not take on anymore heavy contracts, but logical thinking is never dolan's strong suit. it's all dolan now, isiah knows better. he's just a fall-guy.

i know i sound blaissez about the knicks' moves this off-season, but how else can you react? what would make me excited? remember when thorne move K mart for, like, 4 first round picks? amazing! not to say the knicks have any collateral like kmart back then, but instead of dealing these players, we always end up recieving them. can we just stay put? let these guys play out their contracts? damn. keep a draft pick or two? look at toronto... with 1 solid draft pick [bosh] and a bunch of journeymen/role players they're easily more exciting than the knicks... and the had VC stolen from them! by thorne!

so... for the players mentioned? whatever. bring cwebb here. what a joke. still a cwebb fan, but on the knicks? with frye? curry? francis? marbury? crawford? jalen? what a fucking mess! i love it!
Posted by earl boykins at 1:16 PM

yeah, cwebb is damaged goods. but neither mo nor q played well for the knicks last year. especially q, who can't shoot at MSG for some reason. cwebb has two years left at 80mil. if it takes q, mo and/or jalen, I'd do it, especially since frye is so young and hasn't proven to be injury resistant (only played two summer league games before injuring his ankle). cwebb did put up 20 and 10 last year. i have a feeling francis or marbury might be gone even before isiah. it will be isiah's last move, he'll claim that every team gets better once they trade marbury, and ask dolan to keep him yet again and all of ny will be held hostage waiting for the dolan nightmare to end, wishing layden was still in charge of the knicks.
did i mention i love the knicks? i see great potential in Lee, Renaldo, Channing, Eddy, Jeffries, Nate and Jamal. I just wish they'd get PT instead of the expensive veterans: mo, q, jalen, malik. garbage.

i love the knicks too, obviosuly, but i'm sad to see them like this. it's like seeing your son really suck at little league.

i'm glad isiah's coach now. balkman i bet doesn't see any worthwhile minutes. cause we signed a much more expensive version of him in jeffries!

if nate, frye [if he stays healthy] and lee get get run it could be a fun season...