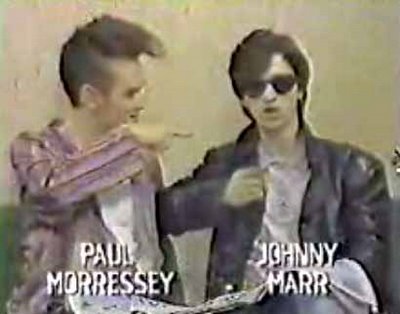 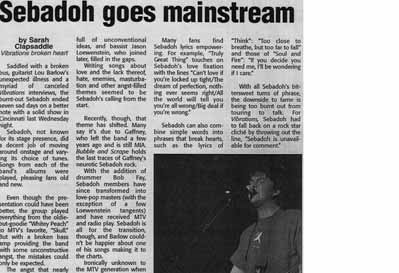 sebadoh III reissue
first line: "Released the same month as Nirvana's Nevermind, Sebadoh's III-- along with Pavement's 1992 album Slanted & Enchanted-- functioned as my preferred scattershot post-adolescent soundtrack."
last line: "I haven't heard anything like it since."

ok so i'm biased. this record was fucking rad. also, when it came out i was right there with stosuy buying up those 7"s and laughing at the indie rock 'fight' tracks. he gave the record a 9.3. i give it an 8.3 [maybe i'm less nostalgic- is that possible?]. the review gets an 8.5.

Fennessey's review of the new T.O. is funny, but i get weirded out by music writers who all of the sudden become black when they review black music. Fennessey sayd "don't get it twisted". it gives me the heebie jeebies. and when trent talks about three 6 on his blog he says 'dawg' every time. ugh.
Posted by earl boykins at 2:31 PM

This is maybe a weird quibble, but hey, I'm weird and I like to quibble....

Have you ever noticed they give old records much higher ratings than current ones? Like, if Sebadoh III came out now, it would get an 8.1 TOPS.

C'mon, Pitchford, stop being so skeeeeerred!

i must be a weird dude, since i've always preferred "bubble and scrape" to III. "sister" and "homemade" are my jams.

yeah pitchfork has to do away with those fucking number ratings. it just doesn't work. 8.1? 8.5? 9.0? what's the difference?

or mayhaps they should forget about writing altogether and just rate the records with numbers. and have all the writers rate them so you can see a bunch of numbers and that's it

that would be funny

how old does jim look now? wow. i have a bootleg of the chunk with chuck on drums and jim with a full head of hair!

Hey earl, first time long time. It's Darrin trying to give you a shout out and somehow I think I've been forced to create my own blog.

First off, hold a place in yourt fantasy league next year. My friend and arch nemesis who runs my current league got away with trading for Wade and Nash with three weeks left in the season so I'm boycotting his shit next year.

darrin! dude i'm psyched to hear from you

for sure remind me next fantasy season to invite your friend...