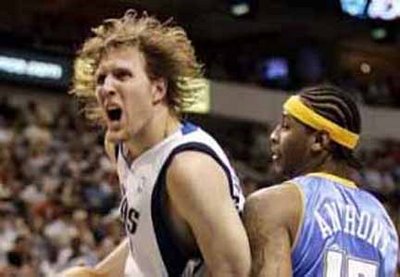 with the knicks all but killing my will to live [more on that later... larry you're still a douche], i've had to re-direct my interest nba-wise. this post goes out to Josh's friends the twins from nuggtown! i'm claiming the nuggs in the west! it's gonna be an interesting finish to the season, but i'd like to take a moment and fan out on melo a bit. after the dream team bullshit larry put him through and all the weird la-la 'this guy is trouble' tags, this guy is becoming a fucking shredding player! 26/5/3! and this week he's shooting threes! sure the nuggs need to win more games, but that means camby's got to come through. evens was a great pickup. they still down't have the outside shooting threat [andre miller is a liability in that way], but melo can take that shot. fuckit dude start bombing!

if the playoffs started today they woould play the griz, whom i think they can take. but then dallas? hm. i do like dirk's hair situations. the clips? hm. i do like the big silly's style too. it's gonna be a weird couple of weeks, but i'd like to see melo get his on national TV.

sure on hot97 he has that spot where he says 'THIS IS MELO I SHOULD'VE BEEN THE #1 PICK HOT97!!!'. hm dunno if he'll ever be as good as bron bron, but if he gets a three in his game and puts up a few X3 X2 then we can talk. make the haters turn their frowns upside down!
Posted by earl boykins at 12:46 PM

nocito get back to work!

thanks for da shout out homes...blogs tight son...fuckin nuggs lets do this....