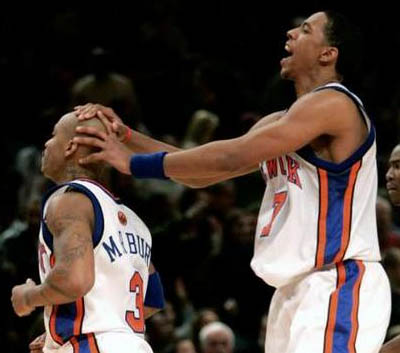 one good win and ny fans go crazy. the bulls win was nice but now WFAN callers are all like 'how far will we go into the playoffs' 'nate frye remind me of stockton malone'. eeeasy there. sure, they're nice players, but rookies are like flavors of the month. they're evaluated by their 'potential' and people go nuts. nate is a scorer and will never be an affective 1 cause of that. and he's too small to d up on the 2's in the league. frye has a nice shot and is rebounding better than i thought. not many blocks or steals though. put him in milwaukee and he's just another 'nice' player. put him in the garden and he's patrick ewing part deux. would i trade him for magloire? chandler? pryzbilla? no. for KG in a package? see ya channing get the fuck out!

not to say i'm hating, but easy with the championship banners! this team will finish under .500, but it'll be damn fun to watch!
Posted by earl boykins at 1:32 PM