and let the circus shit begin... 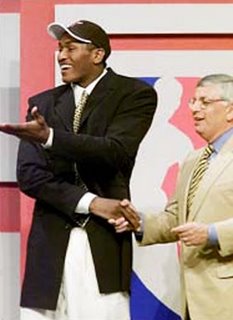 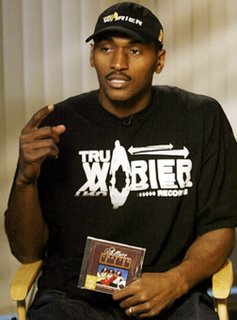 donnie walsh said he'd deal artest, and he said he'll talk to isiah! ok this is totally my fantasy, kinda even over the KG rumors. are you kidding? remember he hit a game winning shot on thanksgiving a couple years ago, bum-rushed the camera and yelled 'QBQBQB!!' haha bring him here why not?

the question therein lies, would you trade channing frye, nare rob or ariza for him? i don't know, but i would say yes. i think frye is the player to get here, as indiana could sure use a big man to help jermaine out, no disrespect to jeff foster. that's tough, dealing frye, but we'd be getting an all-star back. and with artest you're talking about a NYC folk hero. him AND marbury running the garden? curry filling the paint? hell yes

as for chris russo on WFAN that's another story. i have beef with this guy. i'm not one to make racialist accusations, but this goes way back to when layden was GM. mike and the mad dog had him on right after the van horn trade when the knicks were at their WORST. and him and layden were yucking it up! patting his back and tickling his danglers. isiah takes over and the first day on the job chris russo is hating him! now he blames isiah for ruining this team salary cap wise. fuck you! this shit is on layden's and checkett's hands. now today on WFAN he's dissing r kelly for 'disrespecting the anthem' [bullshit that performance was killer] and artest for being a 'cancer'. you know who'd love artest in NY? everyone not named 'mad dog'! douche!