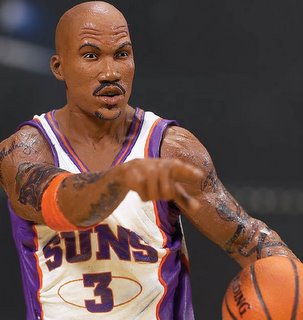 chris russo and all these WFAN callers are fucking retarded with this 'stephon marbury is responsible for the holocaust, the crusades, korean war, etc' a couple years ago it was our FANTASY to have steph back home. now his is, and all people do is shit on him. oh, 18 and 9 suuucks. trade him. him and brown are grown ass men. they are getting paid millions. ok they don't hang out at wendy's together but the get along fine on the court. steph is totally trying to change his game, he's just got a flawed team. a 2 who plays the 1. another 2 who plays the 3. and 4's and 5's who score, but can't rebound or D up. not to even mention the average age on this squad is 15!

'every team has gotten better after steph was traded' the nets drafted richard jefferson and kenyon martin. get them on the knicks, we will get swept in the finals too. the suns got amare stoudemire, joe johnson, and Q. look at their record this season. how much better is nash making that team now? what has nash or kidd ever won?

steph's got 3 years left on a huge contract. who we gonna trade him for? who'll take him? shucks we're stuck with an all-star. i just don't get all the hate. i'm emo about this! he doesn't take bad shots, he's always in the league lead in dimes. and he passes to TIM THOMAS. NAZR MOHAMMED. JAMAL CRAWFORD. TREVOR ARIZA. i'm saying. get a couple dudes half as good as amare and r jeff and all this 'marbury is a cancer' talk will go poof!

remember his katrina press conference the 'babies floating in the river' stuff? people have to shit on someone else. i nominate someone who actually sucks!
Posted by earl boykins at 12:59 PM