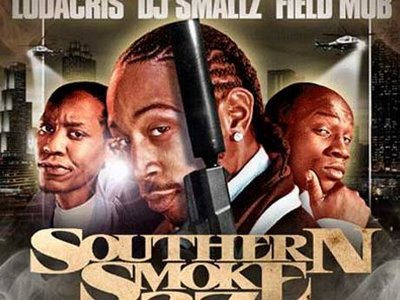 1st line: "Last week, when Johnny Cash topped the album charts with his posthumous CD, “American V: A Hundred Highways,” it was good news for his estate and bad news for record executives everywhere."
last line: "And you don’t have to be a nervous record executive, sweating over the latest SoundScan numbers, to know that no CD boom lasts forever."

christ the record industry is fucked! they have to fix this shit. you can get anything a month before it comes out. for free! and then IM it to someone. in 15 minutes! booo. they are too slooow to this problem. fuck em i say. people will figure out how to get their music sooner than later. hello? whose running these labels? maybe they should think twice about charging $16.99 for an ugly piece of disposable plastic... make me want to buy that shit douchebags!

as for the review? pretty good! smallz and drama are peaking. might as well write about them before they start sucking, which they probably will what with their upcoming $16.99 'mixtapes'. luda's track here is crazy! 50? cam? this is how you shred a dis track! luda kinda takes a dump on jeezy and ross pretty 'haaaard'. but how are you gonna showcase this song that goes at these two, and then follow that track up with tons of jeezy and ross!?

who cares this tape is great. all the southern smokes rule. the tape gets its usual 4 mics. this review get the same.
Posted by earl boykins at 7:50 PM