the best show of the summer so far 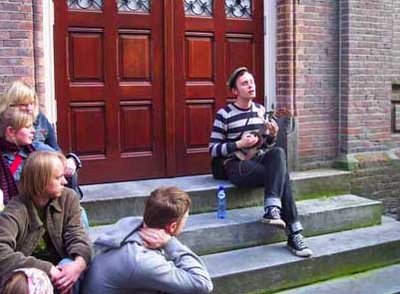 so lite! i got chills at the end! jens!? yup. that shit was so good. he played with 7 blonde swedish girls and declared before his set 'yes. i will play you 14 songs exactly'. at the 12th song [we were counting no homo] it was officially rad. all the hits. punchlines. he mumbled 'i love that song' right after he played a hit! which also brings to mind all the obvious liberal arts/meta fanouts but the truth is, he was super entertaining and not cheesy. he'll give you gags and them sucker punch you with some crazy as fuck lyrics.

like everyone else i was waiting for 'maple leaves', and at the count of 14 he played it. but with no band! no drum machine! no mic! just weird stepping out into a silent crowd with a guitar! 'i think you're beautifuuul! but it's impossible to make you understand that if you don't take my hand i'll lose my mind compleeetley'. haha amazing. i fucks with this show. thumbs up!

almost as big as the two thumbs up i give up to brian and lisa for having us over at the jammer compound a few weekends ago! thank you!
Posted by earl boykins at 9:59 PM

the univision announcer during the world cup would shout "Yes! Yes! Jens!!!!" whenever Jens LEHMANN made a good play. I think that's weird.

that is weird actually.