i'll dig a hole for all your friends 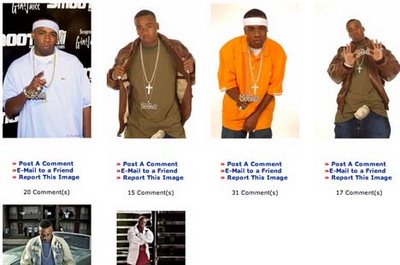 yo gotti gangster grillz review! good! i claim this as good as 'dedication' and 'title'! tons of good tracks, not too many cameos, and some good jokes. sure he isn't hilarious like cam or wheezy, but he's not unfunny either. his voice is funny enough as it is. not unfunny!

let's see what the times said about him
1st line: "Yo Gotti is a shiny-toothed, crime-obsessed Southern rapper who has yet to score a big hit."
2nd line: "For now, let him storm your CD player instead."

this is half assed review! how bout some more words for this dude who's hooked on phonics? but i like how K said one track was 'lovely'.

when will sasha frere jones start blogging about him? this album will blow his mind.

also, i saw the walkmen on webster on wed. yup, they fucking RULE! it was crazy. text messages going on that said 'where the fuck are you this is RRAAAADDD' over and over. someone kept farting in front of us. i figured out it was this girl who was singing along to all the songs. gassy walkmen fans? cheeseburger farts. it was gross i'm telling you.
Posted by earl boykins at 3:20 PM