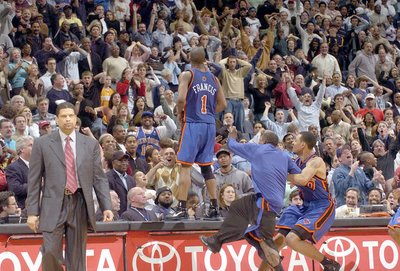 don't look now but that was probably the best knicks game of the season! stevie blunder misses the game-tying free throw, and then the franchise makes an appearance to win the game on a 'prayer' three! BOOM! even clyde was shocked!

now the knicks are ahead of the nets for the last spot in the east. crazy. the pacers are slumping too. c'mon dudes get in there! i want that 1st round sweep. i know it's coming. i want it anyway!

how quickly did the jazz rebuild? i mean, that team is scarily deep when they're healthy. ak-47 role player? gordon giricek and harpring off the bench? that's an instant 20 combined per night! mormons are still really weird though.

artest. what a mess.

the kings. what a mess!

how sick does al jefferson look? he's gonna be a fantasy 3rd rounder next year. dwight howard who? deron's going in the 2nd round too.

josh smith and gerald wallace blowing up in the 2nd half again.

what the fuck is up with the sixers? sammy d is finally putting it together. you can't help but argue that an AI, who scores in bunches and has on-court personality to spare, is no more valuable than boring, steady andre miller. if you gave me the option as a GM, based off salary and fan popularity, i think i'd lean towards dre.

he also looks like a ferret
Posted by earl boykins at 9:33 PM