"i want my bibby back ribs" and/or "that's not a chicken that's a duck!" 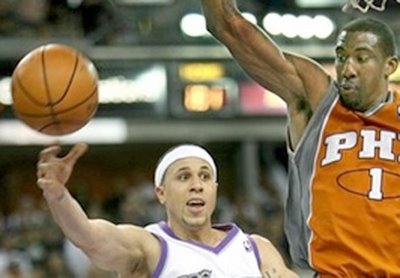 is there not an uglier game in the game than mike bibby's? i mean, he walks like a duck and has the worst tats in the league [jason williams' 'upright mouse-man' is probably worse]. that said, i love his stat lines. this year has been tough, but it's nice when you shut yourself in during a beautiful spring day to see dude drain 9 threes. my fantasy team 'Bad Miller' thanks ye.

the knicks! the poor poor knicks! they look terrible again! steve francis officially has the most inappropriate nickname ever!

ok real talk. kobe bryant is better than jordan. i said it, son! i mean, jordan has more rings, but 3 vs 6 isn't a big difference to me. i mean, 3 rings is 3 rings! i just watch kobe throw up these shots and play the d he does and i can't help but think he could take jordan in his prime.

sure jordan has intangibles but kobes has that to spare. dudes like lamar odom look to kobe in crunch time in that 'steve kerr' kind of way. and those crazy buzzer beaters! when kobe is 'on' it looks like the game is in slo-mo and he's moving at regular speed.

the question is: would kobe's game have developed like it did without jordan as a model?

i still hate kobe as a dude though, but i hated jordan as a dude as well.

why can't they be more like steve nash and less like assholes?
Posted by earl boykins at 5:21 PM