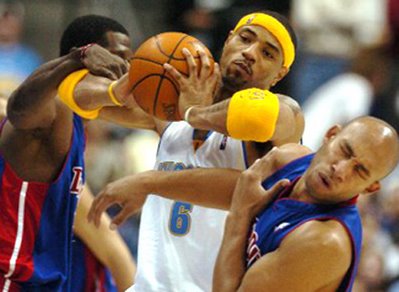 cause you're never going back. remember when j kidd said that after a k-mart alley-oop during an all-star game? i remember laughing. what a dick.

ok let's meditate on the early part of this season.

crash wallace and josh smith. quit pulling an AK on us. crash can't avoid an elbow to save his life. j smoove thinks he's damon jones all of the sudden. the shitty thing is, he's shooting like damon jones!

okur and boozer blowing up. if AK can ever get his health and confidence back this team is super fun to watch. deron looks like he's gonna be a starting guard in this league for the next 10 years.

amare's gonna be ok, but i'm more psyched on d howard. inconsistency and all, this guy is a monster.

chris bosh is a fucking MONSTER.

my man boris diaw is just getting started. he looks kinda shell-shocked, but a couple of good shooting nights, and he'll find his game again, which i'm thinking will be something like 10 pts, 7 rebs, 4 dimes, a steal and a block. REWIND!

so hating on the spurs. watching manu play fucking sucks. tony parker? ugh. they're a great team, i'm just so bored of them.

a team i'm NOT bored of is the warriors! monta ellis is hilarious! baron is baron again. a triple double threat with 8 TO's and awful shooting.

hate the nets too. curly has 2 strait 20 point games but this team is so thin. antoine wright at the 2?

watching danny granger super close. i have no idea what player he's gonna become, but you combine blocks, threes, and playing time and you have my new favorite player.

when ray starts heating up the sonics are gonna be fierce. until rashard goes down with the inevitable back injury. wilcox! playing hard! and NOT in a contract year!?

the nuggs? ako the team is looking good. andre miller got his groove back. melo's scoring is sick but we need to see more rebound and three's to push him to another level. right now he's rip hamilton+ at the 3. JR smith looks good and our man camby is shredding. fuck k mart tho. that dude is a tard.

and the knicks. a win at home last night! balkman showed a flash of promise. frye is slowly coming out of his slump [wtf was THAT?]. Q looks good. marbury looks hesitant. david lee is fucking rad with the rebounds, and francis hasn't done shit. but he will. and to the dude who posted that jamal crawford is the only player you can watch on the knicks? if you enjoy chuckers who shoot 22% from 3 [and shoot 5 times a game!], and 35% from the field, then i guess you're watching the game differently than me. and 2.6 turnovers? ugh. yeah crawford takes some big shots, but one has to wonder: would the knicks be in 4th quarter nail-biters so much if jamal [and the rest of the guards, but jamal especially] played with an average-to-high basketball IQ for 4 solid quarters?
Posted by earl boykins at 11:54 AM

i'm gonna make like j-craw on your wrap-up: crossover dribble and fadeway 3 pointer with 10 seconds to go on the shot clock. booya!

well i'm just drunk and wanted an early superchunk graphic for my eyes while my mouth is taking care of these pickles.

re: ray allen 'heating up'

as for the chunk? oh man. SICK. i gotta busy day tomorrow so the graphs will have to wait, but i can honestly say i got choked up 4 separate times during the show. NH!

is luke ridnour the next steve nash?

good one Earl Boykins... i wonder why you don't sweat the namesake of your fucking lame ass blog anymore. Oh yeah cause he fucking sucks.
I actually enjoy a hipster making a mockery out of a sport he knows nothing about. You write whole articles on the knicks without one mention of this nigga.

The last time I was in New York, Jamal called me to go hang out with Jay-z In the studio...so don't think I'm a loser who just reads your blog all day.
Next time I'm in new york I'll come pick you up from williamsburg and we can go to the Ruckers in a tinted all black Suv and watch you cream all over yourself.

I won't look at your blog ever again....i swear, I'm over it....keep crunching numbers, nerd, i'll be in the boxseats eating nachos.