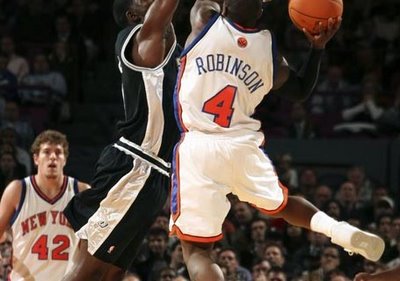 want the 'hustle' unit in there? really?

the starters looked bad. then nate and lee came in and there was a big comeback. it was kinda sweet. marbury took some big shots and made them. malik looked like a veteran who's played duncan at practice for years. it was his D that gave the knicks a shot! then parker hits a big three. i watched the replay right after the shot... but where's nate? not even in the camera shot! then curry blows a jumper and parker brings it up. knicks already down by 9 with 1:00 to go. nate backs up on parker man to man, looks away, and parker goes right by him! nate has to commit the foul. parker to the line. game over for good.

i want nate rob off this team. not cause i think he can't play, which he obviously can, but he gives knicks fans headspins. they remember nate doing his king-kong thing after a rebound [THE SMALLEST GUY ON THE COURT... then what's he doing hanging out with the bigs? he's got to be manning the perimeter], but soon forget his blown defensive coverages and bad fouls. i have to listen to that drunk guy at the bar going 'JUST PUT NATE IN MARBURY SUUUCKS' all season long. to that dude, you're a fucking idiot. love nate's enthusiasm, hate his game, and hate fans who just watch offensive basketball.

also, francis getting hurt is such a blessing in disguise. not for my fantasy teams [all of them], but for the chemistry. but that's so obvious...
Posted by earl boykins at 7:07 PM

yeah, for reals. the blown defensive assignments were killing me. and then flapping your arms after hitting a free throw...down by 6...with 4 minutes to go...in the third game of the year. dyuhhh.

it's gonna be amusing watching isiah go all larry brown on this team. i still think larry deliberately tried to sabotage them. but i also think it's a pretty bad looking team. and i also think i'm pissed cuz i have duncan in fantasy hoops and he only scored like 14 points!

yeah this is like watching a train wreck. we all got on larry's case for the lineup changes in the beginning, but looks like zeke needs to do the same. at the end of last season the changes were just retarded though. it should be settled by the all-star break... please!

this team looks SO overmatched. who knew i'd pine for a healthy jared jeffries this much?

and it's really clear now how bad of a GM isiah was/is. the players make no sense together. sigh. i like how the garden crowd boos curry, who has been their best player so far.

don't get me started on curry

i'm thinking of doing a mega post about him. why do people always say NY sports fans are intelligent and well-informed? since when!? i mean, it's okay to boo. fine. but when it's your 'best' player who's obviously trying his best to succeed? albeit to moderate success, but leave eddy alone. i'll take what he's given us the last 4 games every night. best case scenario for him?

you all know nothing about basketball...jamal crawford was not mentioned once in your pre-season blog, and he's the only knick i can stand watching...stick to emo.