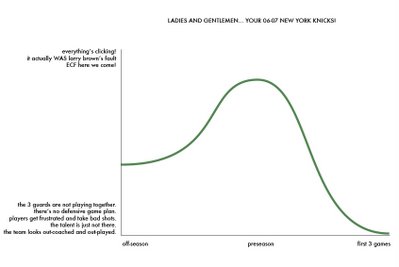 what's the deal. the team is lacking chemistry and all this athleticism isn't clicking right now. i'm willing to be patient but it doesn't look good. sure, you hoot and holler when nate chucks threes and hits the floor, but have you seen him on defense? it's a fucking joke! he goes for the steal every time, then leaves his man standing alone for a pass to the hoop or an open jumper.

it's not marbury's fault either. take his pic off your dartboard. steve nash would be just as confused in this scheme. what scheme? there is none!

i just want isiah to stick to this rotation. STICK TO IT. these guys are all ballers. let them develop chemistry. no trades either... i mean, who would take francis? marbury? who's dumb enough to take them off our greedy hands? sure, teams are interested in frye and lee, but i'm not willing to give them up yet. i'm not throwing in the towel, but it's pretty obvious that this team is not ready to compete. what a joke...

and with the first selection of the 2007 nba draft, the bulls select oden! boo hoo eddy curry you douche
Posted by earl boykins at 3:38 PM

yeah, the zone they played against the pacers was the worst thing i've ever seen. high school kids play a better zone! no, really, they do! how is it a zone if there are large "zones" of the floor no one is defending cuz they're freelancing for steals? booo.

there's no movement on offense, the guards either drive, dump it in to curry (because isiah wants to make him look good and save his ass) or jack a 3 when time runs down. yuck! and then david lee and q rich look like superstars cuz they actually get second chance points.

bear in mind, i was an optimist about this team and i know it's too early to have my 'hopes' crushed. but MAN does it look bad. and i thought they'd be fun bad!

black travis bickle was toying with them. nate was killiong me. worst defense EVER. how many jump shots did the pacers hit cause a knick defender had to switch off to nate's man? many!

lee looks solid but unspectacular. mike sweetney pt deux. francis looks plodding. marbury looks quick but confused. jamal looks ok, but he's just not consistent enough to put a team on his back. it's all or nothing.

i still claim 36 wins, but that sounds dicey. at least we had the same record as the nets for one day...