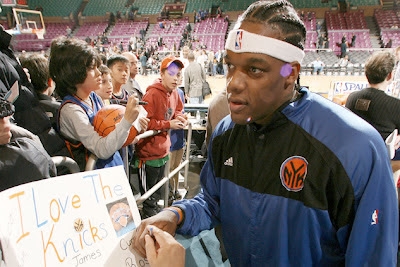 in the wake of the knicks' collapse during the last month, let's deconstruct this image shall we?

the look in eddy's eyes. he sees the recent past... of quentin richardson's injury plagued career. [brandy's not so dumb as she looks]. he sees a broken david lee, who has possibly played the best ball in his life already. he sees a jerome james, a waste of a contract [can i borrow $10,000?]. he sees a jamal crawford, a dim light on an even dimmer team. he sees a stevie franchise, a misplaced piece on a mishandled team. he sees a stephon marbury... a phenomenal player who could never meet expectations and never please enough people. 'character is fate'... blessed with talent, cursed by talent.

finally, eddy sees himself. the gaze says it all. will he ever be anything more than he is now? does a rebound actually exist when it's a rebound in the first minute of a knicks loss? what does the future hold? will it matter to anyone when he's gone? when is his next meal?

'I Love The Knicks'... i do. i do. i do. who does that hand, holding a pen up to eddy, belong to? possibly the creator of that sign? a random observer asking for eddy to leave his mark? a mark. now and forever. the hand belongs to all of us. we watch, we hope, we accept defeat, and we come back.

thanks for the season guys. we can't hate you, because you are us.
Posted by earl boykins at 3:49 PM

That was like some Herman Hesse shit right there.

By the way, you're like the patrick wolf of the nba/music blog scene. The kid is eclectic!

Funniest My Chemical Romance Parody EVER !!!!!