it's time! a position-by-postition breakdown for the knicks! [i named this jpeg 'stephstevieballs'] 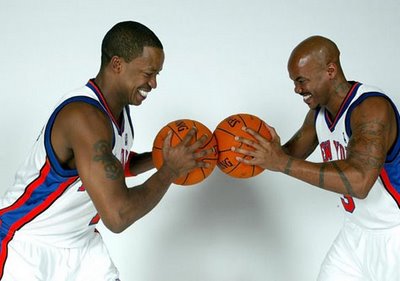 PG: marbury- pros: dude has new shoes, a cousin who just had one of his boys shoot one of fabo's boys [chart coming for that]. cons: the shoes cost $15 and will ruin his feet and telfair might have a comparable season to marbury. verdict? marbury won't become an all-star again, but he's gonna play much much better. i am and will always be a starbury fan! leave the dude alone!

SG: francis- my fantasy sleeper! i got him and felton on all 4 of my teams! i think francis will blow up and end up averaging 15/5/4. i mean, that's fucking great compared to last season. dude is still the player he was 2 years ago on orlando! and larry brown is later'd! boom!

SF: jeffries- ok when he comes back he'll play marginal D and not shoot. fine. Q will come off the bench and get his weird rebounds and chuck a shot or teo. or 10. shoot Q!

PF: frye- what you see is what you get. rick smits this guy is not [and never will be] i think last year's averages are the best you can hope for him, and that's great actually. just steady the ship with this guy and maybe crash the boards a little more. me likes.

C: curry- not mad at this guy. c'mon he was never REALLY gonna be baby shaq. who believed that shit? i like his soft 15/6 juts fine. ok eddy. just shoot. you're just SLIGHTLY worse than nenad krstic and the whole league has a boner for him. but curry's stats are almost identical to nenad's. sure nenad will get better, but all's not lost for eddy. put down that burger and hit the bike eddy! the season hinges on you!

so in the end, the knicks miiight win 10 more games than last year. we'll sniff the 8th seed of the playoffs and get to watch one of the weirdest teams ever assembled. and i'd take all that in a second! 1st round exit? fine by me! i claim the new york knicks will win 36 games this year. done.
Posted by earl boykins at 1:18 PM