So (in other words, "The Wrestler" sucked) 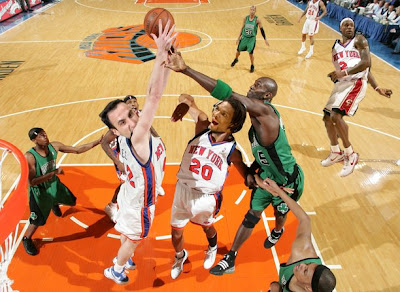 The movie would be called "2010" but it would come out in 2009 and it would star Lebron, Manu, and Bosh, all as Knicks. Darren Aronofsky would direct it. There would be a scene where Isiah Thomas cries in front of Steph after swallowing too many multi vitamins. "You were never there for me..."

David Lee, now as a Blazer, tears off his Jersey in the middle of a game vs the Knicks and sits on the Knicks bench, holding back tears. "But I'm here... I'm here..."

Malik Rose, still on the team as a "mentor", confides in Manu. "I'm just a washed up piece of meat."

The last scene is a winning shot from Lebron's hands in slo-mo. "Anything is possible..." is heard faintly in the background. Cue Mogwai. Fade to blue and orange before the ball hits the rim.
Posted by earl boykins at 12:56 PM

i had that dream, too, but in mine the knicks cheerleaders were all beyonce clones.